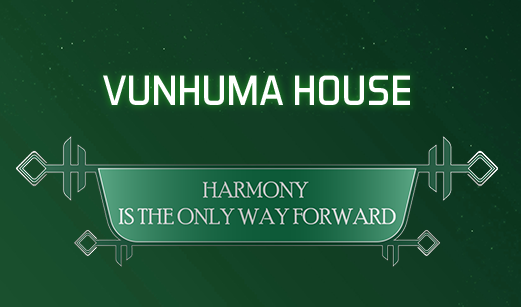 The predecessors to House Vunhuma had a particularly advantageous start when ambrosium crashed into their planet. And yet, even with the explosion of life and resources that the ambrosium brought, they still.disappeared. The House of Vunhuma seeks to correct that past misstep and grow outward toward the Void. For the Vunhuma, harmony is the only way forward. By seeking balance and synergy, House Vunhuma aims to integrate the flora and fauna created by ambrosium with the derelict machines of their lost ancestors . This embrace of nature and machinery is the basis of the Baron Vunhuma To outsiders it appears the Baron possesses some yet unmatched powers, but only those within Vunhuma society know the truth.

The Baron of House Vunhuma is no individual being, but rather a collection. The Baron uncovered .an ancient process by which he could synthesize himself fully with life and instrument, nature and tool.  Starting with the original Baron, vast numbers of Vunhumachose to build toward this ideal and have added their life toward this grand effort . Only the Kutau, the sole communicator and voice of the Baron, expresses the desiresof the Baron to the people. Over time, their society hopes to find the ultimate peace and harmony within the form  of the Baron. It is House Vunhuma’s goal is to stretch their brand of harmony across the universe and, with the power of their Fusion mothership, deep into the Void.

The title of Kutau is bestowed upon the only living person who communicates with the Baron of Vunhuma. For Anesu, this is a lifetime position of power and responsibility. She guides House Vunhuma as much as the Baron and its success and failure also lie with her. When her days are finished, she alone chooses her successor and then joins her predecessors within the consciousness of the Baron.

Mbwiri is a shaman of Vunhuma whose superb healing ability has led the masses to flood her clinics. However, her patron’s fervent, sometimes unreasonable, loyalty has led to whispers of something dark and forbidden gripping their minds.

With a near omnipresence within the galactic political scene, Hondo knows everyone. He uses his connections and influence to help Vunhuma use its vast reserves of Ambrosium to push its civilization beyond the highest of its extinct predecessors.

Vunhumas are recruiting strong-willed Captains to explore the universe and collect large amount of ambrosiums for them on Sunday 17th at 1pm London Time.
They will reward the best captains, those who will defeat they competitors and therefore bring most of the ambrosium.

Enroll for the exploration on Toornament!