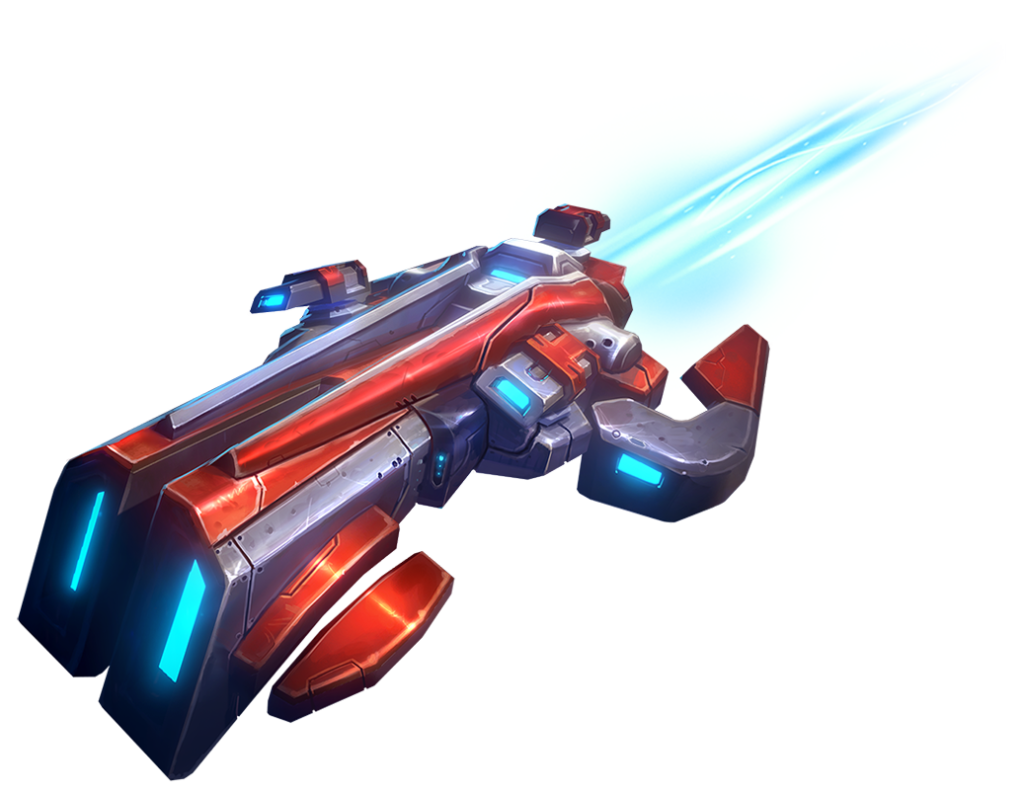 Deals 40% of your auto-attack damage to other enemy ships nearby.

For Archbaron Trexar, the bombing of Glavos began as just another step on his path to glory; it ended, though, with him claiming his greatest weapon.

Of all the subjects in Trexar’s barony, the citizens of the tiny planet Glavos had the greatest skill in mining and crafting ambrosium into weapons of war. The archbaron, raised on ancient legends and histories, dreamed of expanding his territory to claim all the systems that laid on the rim of galactic civilization, and from them forging an empire that would be remembered for generations. The loyalty of Glavos’ weaponsmiths had, so far, been integral to his vision; it was their craftsmanship and the planet’s rich supply of ambrosium that fueled his conquests.

But, of all the weapons that could be wielded against the baron, treachery was the one that cut deepest, and when word reached him that his subjects on Glavos planned to turn his own weapons against him and rebel, his wrath was swift. His war fleet appeared above Glavos’ capital city without warning, and the very weapons the planet’s citizens had made now rained destruction down upon them. The orbital bombardment lasted for days, and Trexar stoically watched the city burn from the command deck of his flagship. The citizens mounted a feeble defense, launching a handful of starships, but none could stand before the archbaron.

When the flames had finally ceased days later, Archbaron Trexar was the first of his forces to set foot on the city’s ruined surface. The destruction was massive, yes, but factories could be replaced – ambrosium could not. And, more importantly to Trexar, the show of force ensured the obedience of the remaining Glavos citizens. And it was only through the obedience of others that Trexar could forge his new empire.

While the planet’s smaller, remaining factories resumed arming Trexar’s forces, his troops sifted through the wreckage of what was the greatest of Glavos’ ship docks. In an underground bunker, miraculously undamaged, was a ship unlike any Trexar had seen before. Powered by a unique ambrosium fusion reactor, the cruiser could generate an aura capable of empowering nearby ships, but most fearsome was its ability to catalyze ambrosium into a destructive beam capable of cutting through anything in its path.

If the baron’s attack had not been so swift, it’s possible this ship might have been launched against him, perhaps turning the tide of the fight, or worse, being annihilated before Trexar could claim it.

The baron saw it as a final gift from the people of Glavos, and one befitting his coming role as an emperor. He named the ship “Excalibur,” taking its name from an old tale from a long-forgotten planet, a tale of a divine sword gifted to a legendary king to smite the enemies of his realm. And just like in the stories of old, Excalibur would be Trexar’s weapon to cut through his foes and build his own kingdom, one that would be remembered forever.

The greatest pride of Trexars